Here at UnBarred, Santa's elves have got nothing on us! For Advent we've released a couple of monstrous new beers to help ease the count-down to Christmas through those long winter nights.

First up is the Tropic Soda; a New England style beer with a massive tropical hit of passion fruit, pineapple and mango puree, balanced out with Citra, Azacca, Mosaic & Idaho 7 hops. Coming in at a hazy 5.8%, this one is guaranteed to bring a blast of sunshine even when it's dark and cold out.

Next is the Stoutzilla, an old favourite that you can expect to see roaming the streets every year at Christmas. It's a beast of an Imperial Stout, brewed with crazy amounts of chocolate malt, lactose, Bramling Cross hops and muscovado sugar in the mash. It's finished with a glug of bourbon, lots of Madagascan vanilla and dark fruity coffee from our friends at Lindfield Coffee Works who blended a bespoke coffee just for this brew. The special can design features an incredible scratchboard image of Stoutzilla terrorising the Brighton Pavillion, courtesy of the outrageously talented Paul Jackson.

If you were able to make it along to one of the tap-takeovers in Mother Kelly's in London or Bison Beer in Hove, let us know what you think. Below are some snaps from Thursday's Bison take-over where we split the taps with Missing Link Brewing (whose cracking IPA, APA and Pilsner have to be tried). Otherwise, keep your eyes peeled for cans at your favourite retailers. These beers are proving to be very popular and won't be here for long... 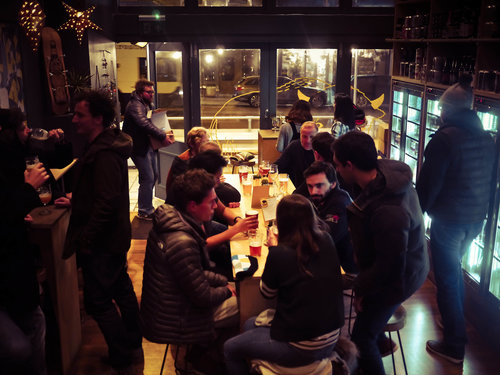